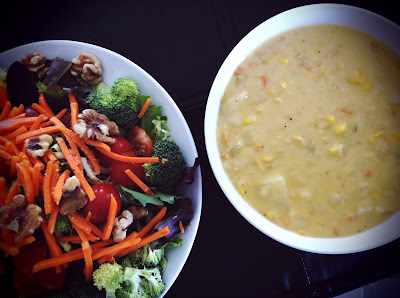 I followed this all-recipe for Creamy Vegan Corn Chowder, but un-veganized it by using whole milk instead of soy milk to please the hubby. Still a lot healthier than my normal similar soups - like Cajun Crab and Corn Bisque - since it uses a little bit of olive oil instead of the normal sticks of butter, and milk rather than heavy cream. And, of course, meatless.

This was really good, and surprisingly thick and creamy. I followed one of the comments, adding potatoes and also added a tiny bit of my secret ingredient - liquid crab boil! I was worried about the thickness from some of the comments, so added 2 tablespoons of flour and was sparingly used the extra broth. Next time I won't worry so much, and when I reheat for lunch tomorrow, I'll probably need to add some more veggie broth to thin.
Posted by Corrin at Sunday, September 25, 2011