We spent a third of August on a road trip through Europe, which is I think it the biggest adventure of my life so far. Husband and I jokingly call this our foodie tour because we were way more interested in eating than in sight-seeing. Since we were going to be in each city for such a short amount of time (one night), we really focused on where to go for dinner each night. Hubby even chose the hotels based on their proximity to the restaurants that looked most interesting. I can’t believe we basically planned this trip in two or three weeks and it was spectacular.

Most of the food on this trip was pretty special - starting with the airplane. Although airplane food is pretty bad in general, this time I ordered a vegan meal, and it was nice to start the trip eating veggies and rice cakes.


I don't mind eating decadent fattening food but only when the taste is worth the calories.* I’m always surprised by the difference in flights getting there (Lufthansa) and coming home (United). Lufthansa is so much better. The flight attendants are nicer, they provide free booze (including after dinner drinks), and their vegan meal was really good. United didn’t have veggie meals for me, and they were super unapologetic about it - they acted like it was my fault even though I had requested them way ahead of time.

I read about someone who collected cookbooks from each place she visited as souvenirs, and it gave me the idea of collecting recipes instead. A great dish that would remind you of that place and time every time you made it. Pretty genius, no? Zucchini Picatta would totally be my recipe from Munich: big slices of zucchini coated with an egg parmesan mixture and fried? baked? Served with spaghetti (unnecessary) and tomato sauce.


I had it at a little place we stopped for lunch before we left Munich and I loved it, now I just need to figure out the recipe for it. Munich as a whole was pretty great, and I could definitely consider living there. We stayed in the old town, and although it was lovely, it was also a bit busy and touristy. The buildings around the Marienplatz were absolutely incredible, so ornate and beautiful: 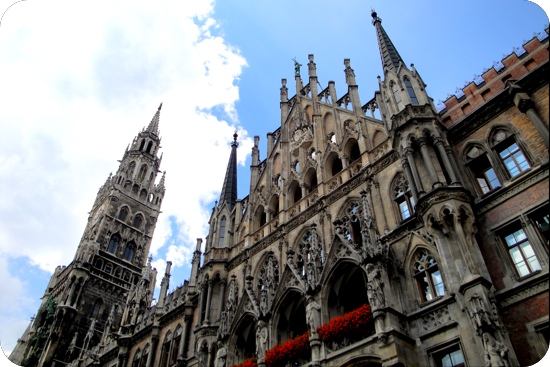 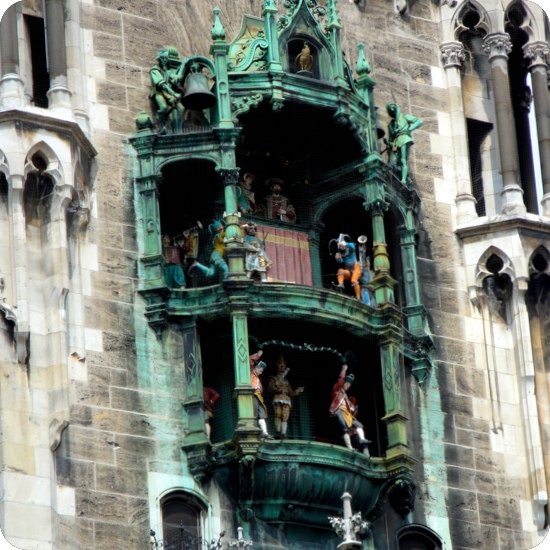 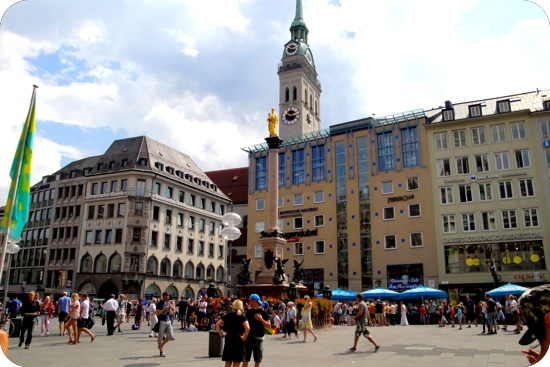 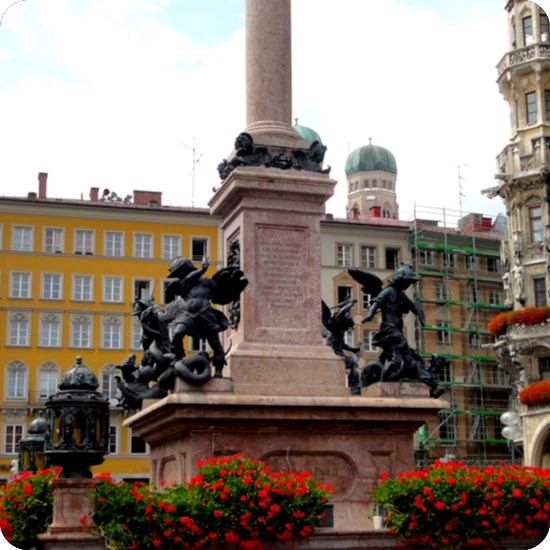 The Cortiina hotel was perfect, although almost impossible to drive to. Impossible for jet-lagged tourists with a rental car that came without GPS even though GPS was specifically ordered, due to tiny one way streets and lots of road construction. Eventually, the hotel staff told us to just pull over where we were and walked to meet us and direct us back to the hotel. We had a spacious modern room with a kitchenette that closed away into a closet, big bathroom with nice toiletries, air conditioning in the rooms (although not in the lobby and restaurant), on a nice quiet street. 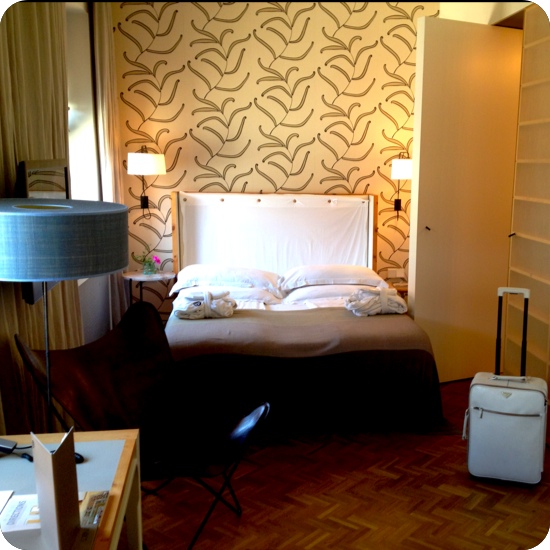 One of the downsides to our room was that it had thin curtains and shades so you can't make it dark inside the room when it's light out. But what really ruined my experience at this hotel was that the phone rang all night long. Seriously. From midnight to 3:30 am it rang one ring about five times, every half hour or so. It was a modern compact phone, and I couldn't unplug it at the handset. I finally had to track the wire to the wall outlet behind the curtains and unplug it from there. Not fun in the middle of the night when you are so groggy. I had already stayed up over 30 hours in an effort to get on European time and by the morning I was almost crying from frustration. I know this isn't the hotel's fault, but it still really, really, really sucked.

Other than that, this hotel has all my must-haves for a hotel, including great drinks at the bar. I had a gin basil smash, because I'm a sucker for cocktails made with basil, especially when you can see several basil plants sitting right on the bar that they just grab the fresh herbs from. (note to self: look for a basil scented candle!) Hubby had the dark and stormy; it with came with a garnish of half of a frozen lemon filled with citrus foam, which, while a very cool-looking touch, was a bit awkward as it had to be removed each time you took a sip. 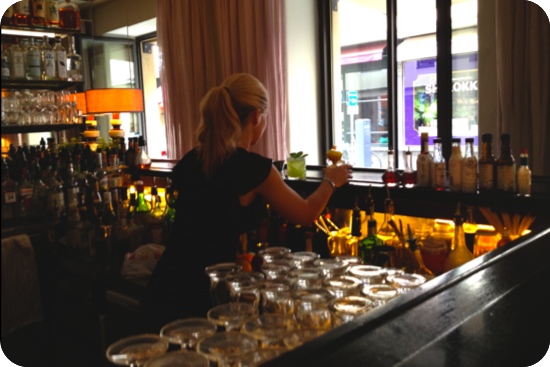 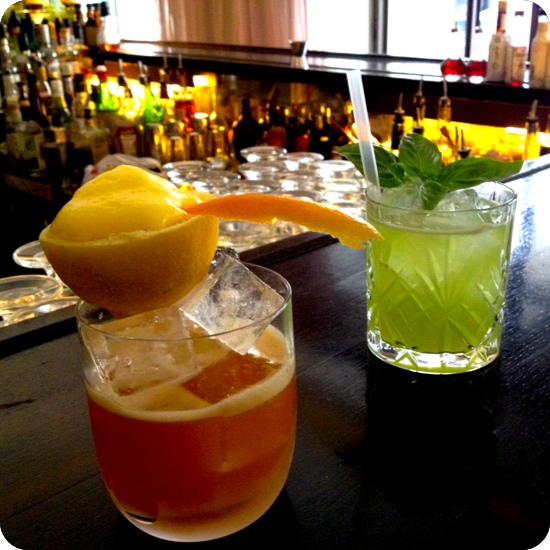 We checked out early the next morning and I spent the day walking around the shopping area and then headed back to the hotel where I spent a few hours sitting outside in their courtyard drinking coffee and mineral water and reading Just Kids on my kindle. Basically a perfect day. It started storming right before hubby came back with the car to pick me up for our drive to the next city. 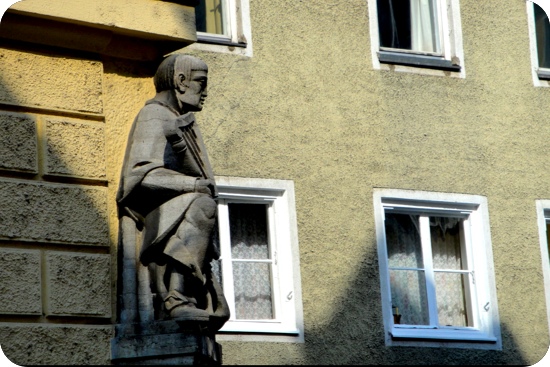 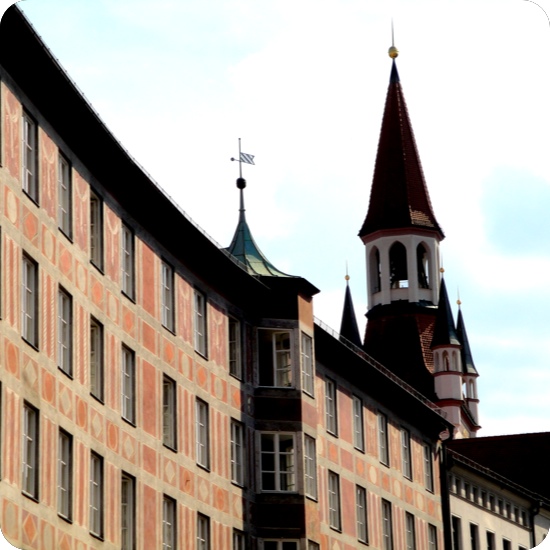 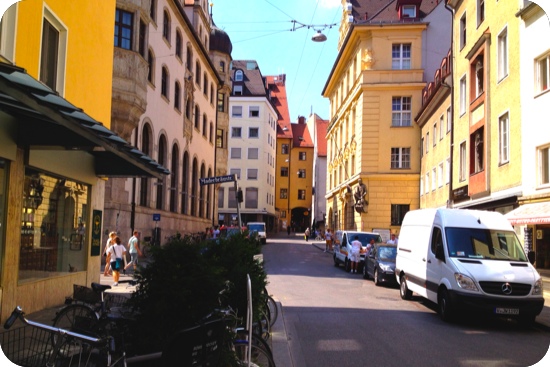 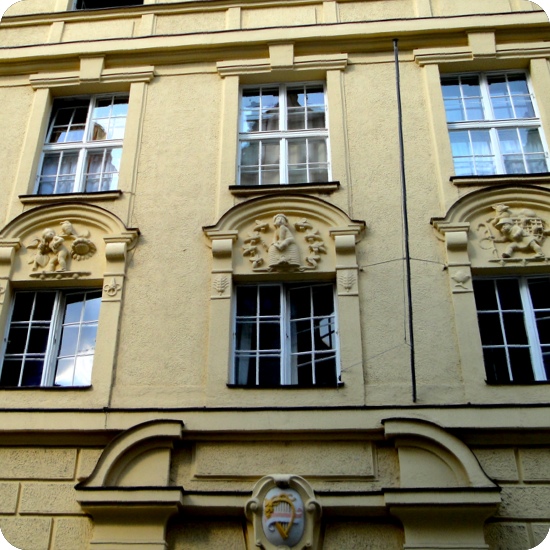 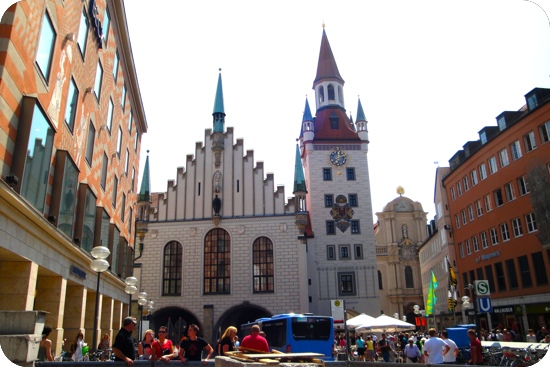 *Total side note: I don't eat most meats on a daily basis purely because of the horrible way animals are treated in our current food system, but I've made the decision that while we are traveling I want to enjoy the experience of, say, ordering the chef's tasting menu or the local specialty without worrying about what I will and won't eat. Right or wrong, I think it's the same reason as why I don't feel bad about purchasing a leather handbag or pair of boots, because I only do it so rarely versus multiple times every day.