You've gone away, you don't feel me, anymore

The worst is over now and we can breathe again
I wanna hold you high, you steal my pain away
There’s so much left to learn, and no one left to fight
I wanna hold you high and steal your pain (lyrics from Seether's Broken)
Posted by Corrin at Wednesday, January 12, 2005 No comments:

Why did you take a lamp?
Because I needed light.
But why did you just take one lamp?
Because I was trying to be nice and reasonable,
because you freaked out when I asked for a side table,
because that way we could each have one...
which of the answers is he looking for?
What am I going to do with one lamp?
One lamp is useless.
You might as well just take both of them.
So this is how it's going to be.

I took one lamp. I took one pot and I took one frying pan. I took my desk and computer and the twin bed out of the spare room. He watched me pack. He opened the boxes of my clothing and knick-knacks to see what I was taking.
He insisted we split the framed photos. But they were all photos I had taken of my family and then had framed, and I couldn't leave them. Instead I left the framed pictures of us on the wall:
Us, on the cruise with fancy pineapple drinks in our hand waving from the port. Us, sitting in lawn chairs eating snowballs at the Mardi Gras parade. Us, gazing at each other while slow dancing in my bridesmaid dress at my best friend's wedding. Us, on the first year's Christmas card where we sat outside with the dog and the cat and my brother took pictures until we knew that that one would be perfect, the dog's head cocked to the side between ours. And, the most newly framed us, smiling from behind the three-tiered cascading-pink-roses-that-perfectly-matched-my-bouquet on white-icing cake which took me three whole afternoons to decide on.
That night he called and asked me whether I took the paper towels with me. He didn't believe me when I said no. They aren't here now and they were here before you packed.

\seh-run-DIP-uh-tee\ noun : the faculty or phenomenon of finding valuable or agreeable things not sought for; also : an instance of this
Posted by Corrin at Wednesday, January 12, 2005 No comments: 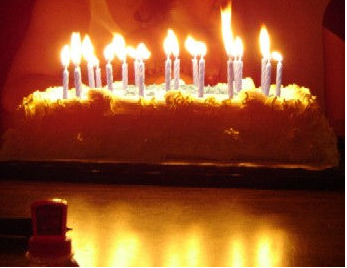 My birthday was the start of a whole new life. A new time for feeling alive, for endless possibilities, for fulfilling potential.

I couldn't get rid of the feeling that everything was going to be perfect. And almost a month later, everything is. Perfect in the sense that now so, this is life fills me with satisfaction, hope, and excitement instead of the previous overwhelming feeling of disappointment, dread, and being completely lost. Maybe it's taking action, maybe it's having a new perspective, maybe it is Neptune after all... most likely it's the combination of all those things.

I've accepted that rectifying mistakes is an accomplishment in it's own right. Something difficult and something to feel proud of. I've always promised myself that I would never live with regret, and it's something I've been struggling with. I knew if I didn't change the way things were, I would be choosing a life of regret.

People might not understand the sudden changes and that's ok. It's the start of something new, but to me it's not sudden at all. It's finally being true. It's the ending of a path—not a wrong path because it's contributed greatly to who I am today and at the time I started it was right—and the beginning of another path. I've been going in circles and taking baby steps for a while trying to figure things out, instead of just taking the one big step aside.