Las vegas! We stayed at Bally's, which was very cheap and convenient, but not that nice compared to some of the others, especially considering that everything there is pretty cheap right now: 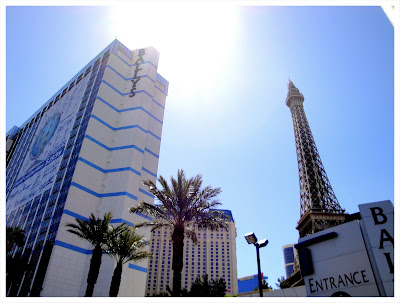 Our room was nice, and bright: 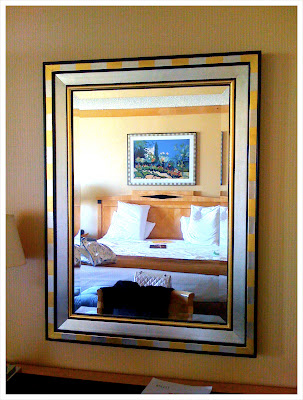 But there was no coffee maker (I hate that!), so we just resolved to order a pot from room service every night to be delivered first thing in the morning: 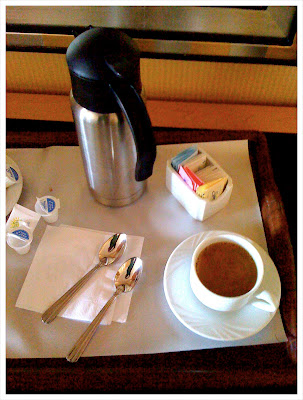 I totally want little cups and saucers now. Oh, and a little cup filled with sugar cubes with tiny tongs to dish them out (and this).
Here's the view from our hotel window, it looked like some kind of artificial desert wasteland: 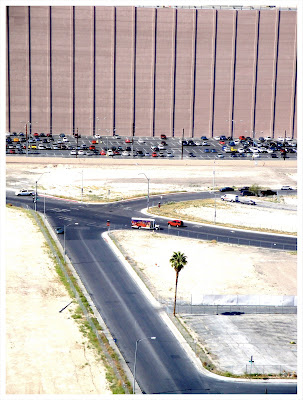 So desolate, but if you looked higher above the buildings, you could see the mountains. It's so weird to me to have a city with those incredible mountain views that pretty much just looks in on itself instead. 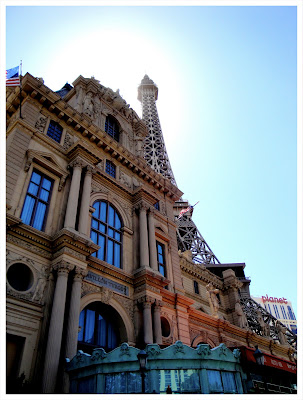 We were connected to Paris, and had to walk through these little artificial French streets to get where we were going: 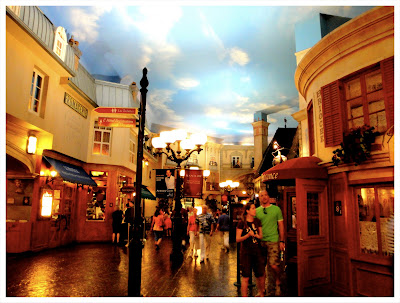 It was quite bizarre, you couldn't tell at all what time of day it was, and I really felt like we were underground.
Paris had a restaurant that we went to the first day for dinner and the last day for breakfast. Both meals were quite good (blueberry french toast with whipped cream and blueberry syrup!) and the servers were really nice: 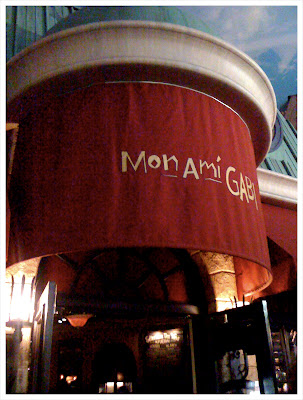 We didn't venture out too far for most of the trip; I spent most of my days surrounded by palm trees (and drinking dancing bikinied girls celebrating 21st birthdays) at the pool: 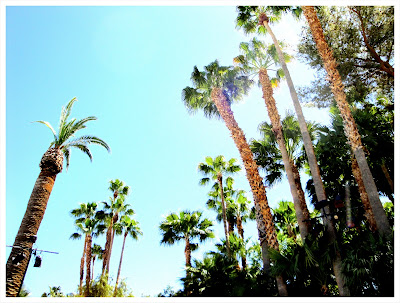 (but only for a few hours at a time because it got hot so quickly! I've decided that I need a hotel pool here. I love being home, but I really love being on vacation.) And going out to eat. Here's Serendipity 3 where we stopped for lunch the first day: 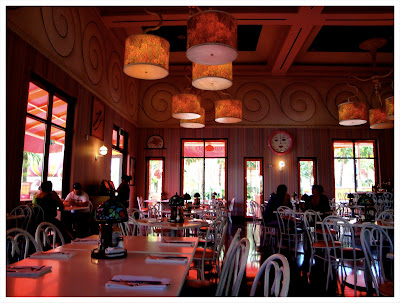 and had giant mugs of cinnamon coffee: 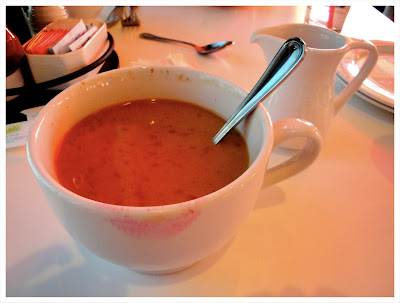 There was also a $1,000 sundae on the menu.
Las Vegas Blvd. had many, many lanes with crazy drivers, but so many walkways connecting the casinos and sidewalks that you hardly ever even had to go onto the actual street: 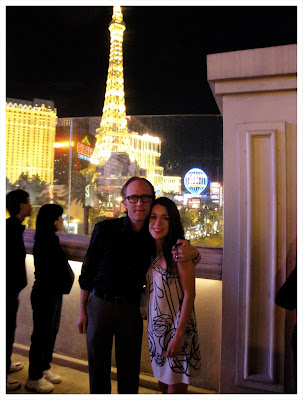 The strip looked so much prettier at night: 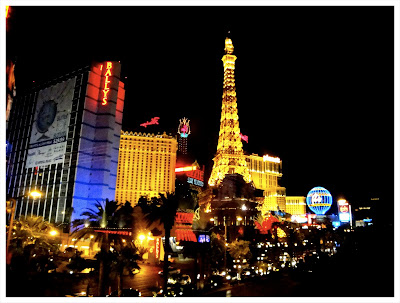 That is how I expected Vegas to look. During the day it really kind of sucks as far as being something to look at.
It was so much fun getting dressed up every night. I'd been waiting to wear this dress from Rome: 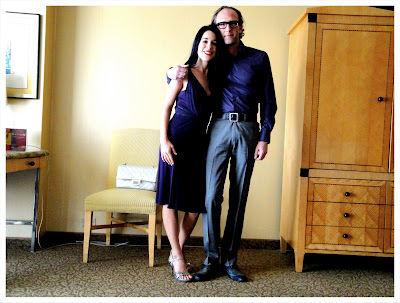 We both wore purple - matching outfits! This was to go to dinner at SAGE in the Aria hotel, it was really nice and they even had fancy stones and flowers in the restroom sink: 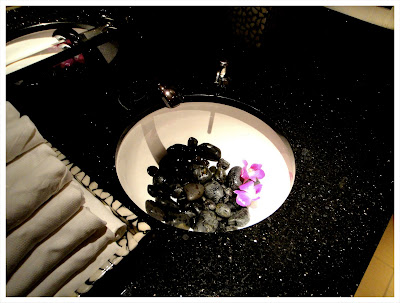 The hotel was pretty fancy also; here's the view from the front: 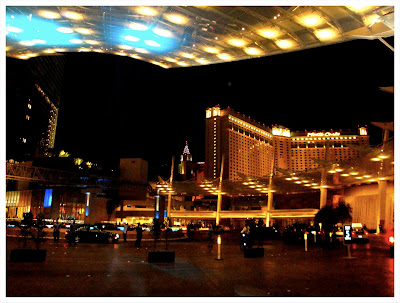 where we waited for a cab to take us to The Venetian, so that D. and his friend could play Texas Hold'em (with a funny group of men including three guys from Holland). 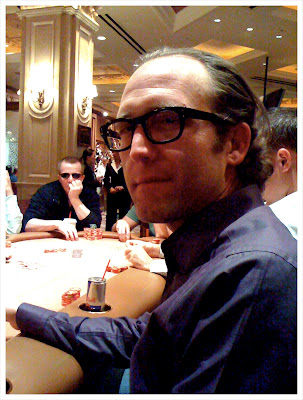 I totally pretended I was Vesper in Casino Royale, and in charge of deciding whether to authorizing the next million. She had a purple dress too: 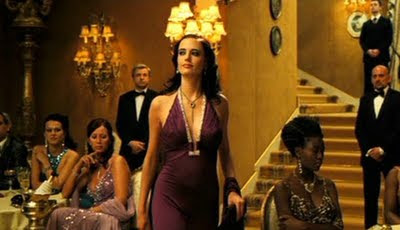 I also figured Vegas was an excuse to wear my sequin dress, even though we just went to dinner and some window shopping in the Forum Shopps at Ceasar's Palace: 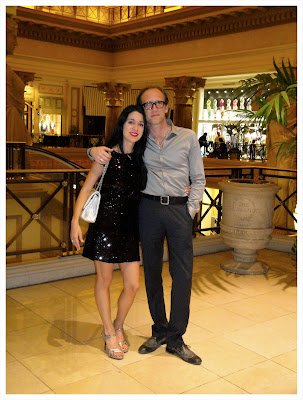 Even in Vegas, people kept asking whether we were going someplace special. 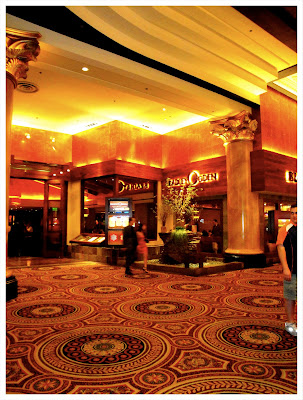 Again, good food, but oddly enough, they had some kind of peanut butter and butterscotch puddings for dessert, good pudding, but still, pudding?
Anyway, that was Vegas. The whole thing has sort of a Times Square/Broadway type of feeling (but maybe a little better?). Good food, great shopping (which we actually refrained from! Will power! Or maybe just having already overstuffed carry-ons), fun poker (ESPN - here we come), and the airport is really close. I'm glad we went, but if I ever go back, I think I would rather go outside the strip and into those mountains.
Posted by Corrin at Tuesday, May 04, 2010