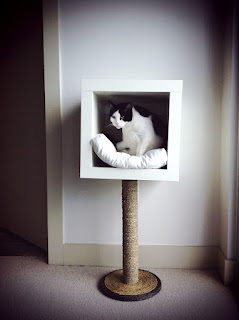 Hubby wanted something more stylish than the beige carpet covered cat furniture we've had the last few years, but I wanted to make sure the cat would like and use whatever we replaced it with. After looking online at lots of modern cat beds with metal posts (not practical for scratching...) we decided to make one instead. A trip to IKEA later, and we had something modern that Spot loves even more than his old stuff. 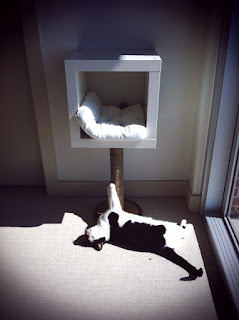 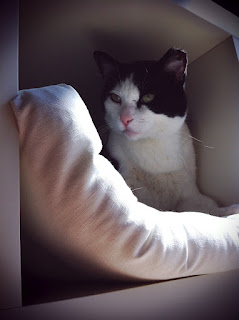 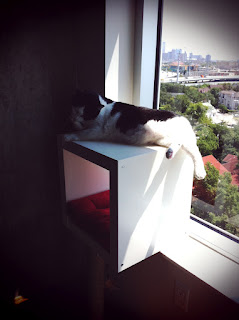 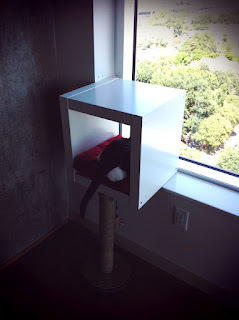 EDIT:  I've tried to reply to the comments below or just leave my own comment so many times but it keeps disappearing. Seriously, how are you guys leaving comments when I can't?

Anyway, the cat box is secured to the wall (with included hardware - screws and bolts) and windowsill (with extra strong velcro tape - works for almost anything) and the scratch post is just wedged below, making it super easy to change out once it is all scratched up. We were lucky that the windowsill and scratch post were exactly the right sizes. In our new apartment, we used these posts: http://www.drsfostersmith.com/product/prod_display.cfm?pcatid=14667 with the short bolts and had to drill a hole in the bast of the box to accommodate them. Still just wedged in, our cat vigorously scratches them and they still don’t budge. Also, Ikea stopped selling those square wall shelves, but if anybody finds a replacement I want to know about it!