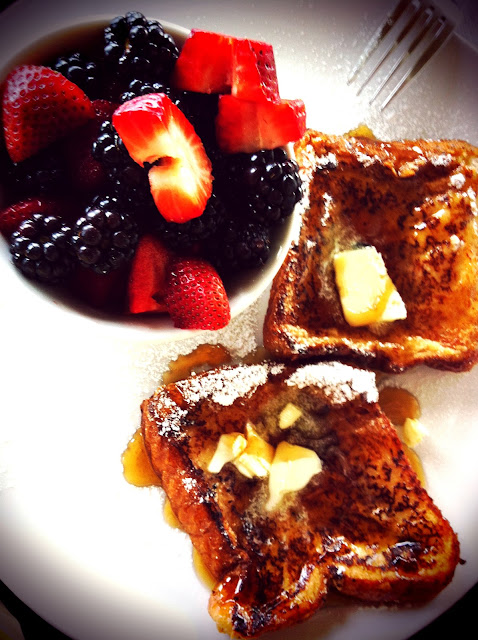 One of the things I used to love was making a huge Saturday or Sunday brunch. But with eggs, bacon, and sausage off the menu, it didn't seem like much of an option. Enter this recipe for vegan french toast. It was so good, everyone agreed that it was even better than the original! (Note: this picture has real butter pats and white bread, but mine had Earth Balance and wheat bread and was still really delicious.)

Blend banana, milk, cinnamon, and vanilla in food processor. (You want this to be runny like the egg mixture from French toast, so adjust the proportion of milk to banana if needed.) Pour into flat dish.

Dip bread slices, coating each side.

Fry in skillet until golden brown on each side.

Our bruch consisted of some cut up berries, strawberries and peaches, sauteed onion and, red potato home-fries, and a few different kinds of soy sausage to try them out. Surprisingly, hubby was really into this MorningStar Farms sausage.