in defense of food 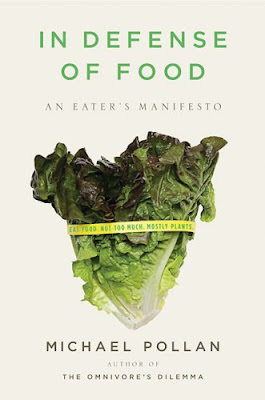 Started and finished this book on the plane from San Francisco. (Um, 3 books so far for January, not a bad way to start off that resolution.) I bought it because of the cover tagline: Eat food, not too much, mostly plants. I think this is a pretty great philosophy towards food.

Reading the book felt a lot like a validation of our lifestyle, and made me feel like we're doing ok. I have been trying to eat more veggies, cut back on meat, and cook more; this book advocates all. I think the best real-world tip that I got from it was to look at ingredients when choosing food and pick the ones with the fewest, most recognizable, ingredients. This actually resulted in a few different choices in the grocery store yesterday, particularly my choice of crackers and yogurt. It also opened my eyes a little to the importance of organic food, and eating locally, which before I assumed was always a gimmick.

I would probably not have purchased this book except that I was at the airport, but I thought it was a great read - interesting and informative although mostly common sense. I would recommend it, but only if you can borrow it from a friend or the library. It's not complicated enough information to need to keep around as a reference.
Posted by Corrin at Tuesday, January 18, 2011