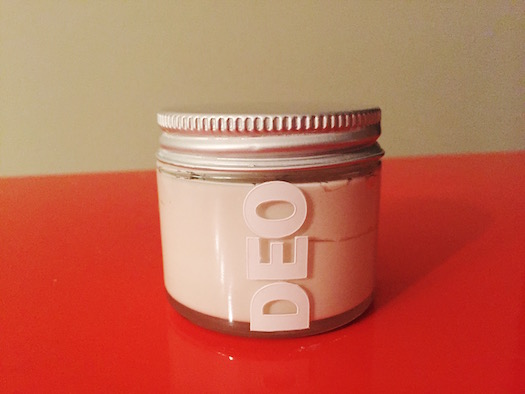 Almost five years ago, I decided to try to stop using conventional antiperspirants. Since then, I've gone back and forth from conventional antiperspirants, to deodorants that claimed to be safer and only kinda worked, and truly safe deodorants that totally didn't work. For a while I even used the crystal deodorant, which kinda worked as long as I showered every night and used it fastidiously while having wet underarms, but then I read that it works because it contains aluminum. Ugh.

Basically anything that kinda worked well had dubious claims as to truly being safe. I felt like I was trading a long shot at safety for an inferior product. I was constantly self-conscious about being stinky. And I was wasting a lot of money, since most of the tubes I tried from Whole Foods or the grocery were used a few times and discarded. I asked my husband, who is a super skeptical science-y guy, to do some research into it and let me know if I should even be worried about antiperspirants and health issues. So he did, and my "everything is a chemical" guy came back and told me I should try not to use anti-perspirants. Finally, I started looking into higher-end natural deodorants. The kinds that cost more than $10 and aren't available anywhere local. There's no way I was spending $20 plus shipping on a deodorant that I'd use once, so I started reading countless reviews on products and ingredients, even diy recipes. I decided against formulas with baking soda (because of skin irritation) or alcohol (because of health implications). I didn't want to use diatomaceous earth (it grosses me out). I specifically looked for products for sensitive skin. This left me with a short list.

The first product I decided to order, based on reviews (and my love for cats, what?) was Meow Meow Tweet's Grapefruit Baking Soda Free Deodorant Cream. It's vegan, all-natural, organic and it worked better than anything natural that I had used before. I liked the smell which, unlike some of the floral or coconut-scented deodorants I've tried, helped mask rather than accentuate my natural body odor and didn't interfere with my perfume. I didn't mind rubbing it into my (clean) pits at all, although that was a common complaint on a lot of deodorant cream reviews. And did I mention, it worked? (I mean, mostly worked. I had to reapply after workouts or excessive sweating, but I could live with that.) I had initially ordered the mini size (for $8), and when I actually used that up, I re-ordered a big size (for $14). I loved it. But the downside, besides the price and inconvenience of having to order my deodorant off of the internet, was that it was hard to rub in. It sort of gathered in the underarm creases and left white marks on my clothes. Also, I had read that using starch in warm damp places could cause problems (underarm yeast infection? yikes) although those issues were not specifically about Meow Tweet products.

Soooooooo, I decided to try to make my own. This was the first time I've diy'd anything really, but I figured I didn't have much to lose. I used the ingredients that worked for me from the deodorant cream, minus the arrowroot powder, and consulted many different online diy recipes as as rough guidelines for ratios of powders to carrier oils to essential oils. I spent a few days making batch after batch of creams until I found the right recipe for scent, consistency and protection: 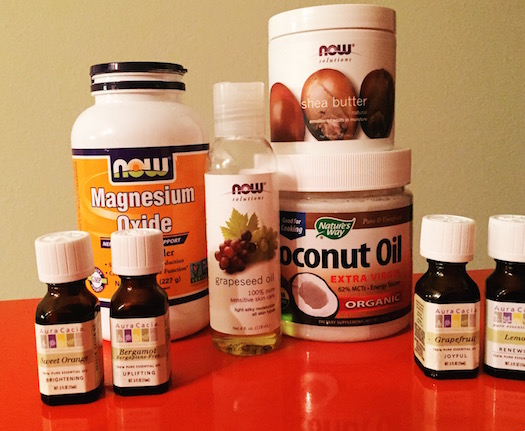 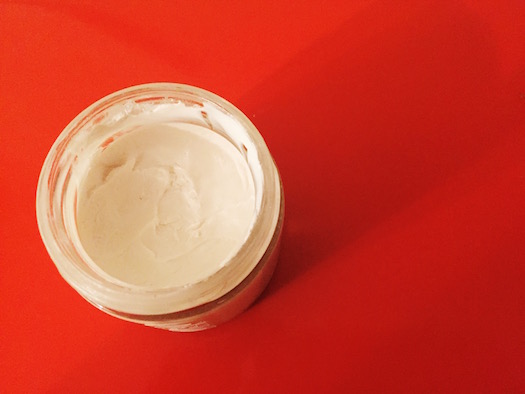 Since it's super easy to make -- just melt and mix -- I can make a super tiny batch at a time and not worry so much about homemade beauty product issues like lack of preservatives and bacteria growth. I also make sure to sterilize the jar and utensils used by boiling them. I've been using this recipe now for about 6 months and I still really love it. It's actually much different in texture than the Meow Meow Tweet cream, this one's softer and less paste-like. I like that it melts in a bit better and wipes off a bit easier if I use too much. Of course, it still doesn't work quite as well as antiperspirants containing aluminum, so I have an teeny tiny jar that I keep in my purse for really long days. I can live with that.

It's sort of weird to have come to the end of the great natural deodorant search, but that's where I am. For those of you still on it, I would highly recommend starting with Meow Meow Tweet.
Posted by Corrin at Friday, February 19, 2016