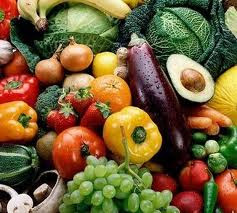 I've now been a vegetarian for over a month. I love vegetables, I love a huge salad for dinner, a bowl of matchstick carrots and peas for lunch, and I really love a big bowl of beans. So, for me, it was a surprisingly easy transition. Even though we are often traveling, and have many long road trips, there is almost always a vegetarian meal to be found, even at fast food joints. (Although one night, my vegetarian dinner was a large order of onion rings... I'll remember never go to a Dairy Queen again.) McDonalds, Taco Bell, and Subway, are all over, and all have good options for vegetarian fast food, even though there is generally only one thing available (salad minus the chicken breast, bean burritos or potato tacos with rice, and veggie delight sandwich with side of apples, respectively). I've had grilled vegetables in a sushi restaurant (Salmon sashimi, you are the only meat I miss), had two appetizer salads as my entree in a rather fine restaurant, and had double sides of beans and rice in a mexican restaurant. I've stuck to this new, kinder, diet and I'm pretty proud of myself for that.

We're traveling now and if it's easy in Texas, it's absolutely no-brainer to be vegetarian here in Palo Alto, CA. Almost every restaurant has an entire vegetarian entree section. Penne pasta with fresh vegetables in a chunky tomato sauce and portobellas sauteed in balsamic vinegar served over grilled bread .... yes, please! There's even an all-organic, all-vegan cafe down the street, which we hit up for lunch today.

Veganism is my looser goal, and that is a different story. That has been really easy to do at home (except once a week when I cook my husbands' favorite meal of black bean enchiladas covered in sharp cheddar cheese), but much harder to do on the road. I was shocked that even a tofu salad that I ordered at a cafe in San Francisco came with an unlisted half of boiled egg on the plate. Hello... Otherwise, it seems like a lot of places just replace the meat on entrees with cheese to make them vegetarian. I can do without cheese, but will eat it if it's there. I was a huge dairy eater, and started every day with a bowl of yogurt and berries. Now, I actually prefer soymilk to regular milk in my coffe, and just eat the berries with ground flaxseed instead of yogurt. I only ever bought eggs before anyway when I wanted to bake, and I was initially sad about no more baking, something that I love to do. I've since baked a few things - pumpkin bread and chocolate chip cookies - using applesauce instead of eggs, soymilk instead of milk, and vegan margarine instead of butter, and they turned out fine. (Although I did learn not to go crazy by in addition to the above, also switching up sugar, flour, and adding flaxseed and stuff. It just alters to much from the original and becomes not satisfying, especially to your non-veg hubby.) So, my casual plan is that I will eat vegan as much as possible without being a drag to be around, stressing myself out, or not enjoying going out to eat.

Although I initially refused to buy any animal products at the grocery, I gave in and now buy whole milk and cheese for my husband. It's a compromise. He's been really supportive of not eating meat, but after a week of soymilk, he insisted on milk and cheese for himself. We researched the brands and picked the seemingly ethically best milk and cheese available, although I'm not convinced. Also, I am continuing to buy non-vegetarian cat food. I just can't justify potentially hurting an animal that I am directly responsible for and love (my cat), to save the other animals (tuna). I've read different things about vegan or vegetarian diets for cats, and I'm not convinced it's healthy for them.

So, that's the journey. It's only been a month, but I didn't expect it to be so easy (especially if I stay out of sushi restaurants). I haven't lost any weight (but luckily I don't need to), which I think is mostly because before I rarely ate any whole grains or pasta or rice in my diet, and now I eat them much more often. I feel like I'm living more true to myself, which is satisfying. I also think I've been eating a much greater variety of more healthy foods than before going veg, since this diet made me hyper-conscious of getting the required nutrients, which can only be good for my body in the long run.
Posted by Corrin at Tuesday, October 11, 2011