I read somewhere that the average person who cooks dinner often usually only uses about nine different recipes. This seems about right to me for your tried and true go-to meals, then add in the special occasion recipes and the one-offs that you experiment with but wouldn't make again. Anyway, since the vegetarian thing happened, I've been having to rebuild and adapt my collection of basic recipes. One of my favorite comfort food recipes, that I spent quite a while perfecting, was the classic southern stuffed bell peppers. Enter this Quinoa (and black bean) Stuffed Bell Pepper recipe from Good Life Eats. 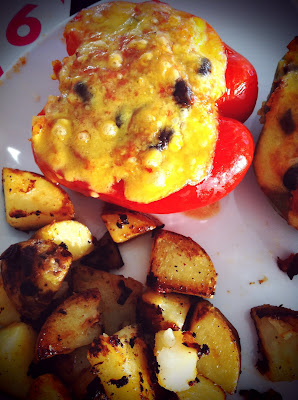 I had just halved and made my Black Bean Enchilada recipe, so I already had a half can of black beans that had been drained and sauteed with olive oil, onion, garlic, cumin and chili powder. So, I halved this recipe too, and it still made enough for two meals for us since one (half) pepper was so filling.
This was my first time cooking (or eating) quinoa, and it was easy and good! I made a few changes from the linked recipe, including making all of the stuffing mixture in one pot because the directions were a bit vague there, and using cheddar cheese because we had it, and they turned out fantastic.
Quinoa and Black Bean Stuffed Bell Peppers
olive oil
1/2 c. onion, chopped
1/2 c. celery, chopped
cumin
garlic
15 oz. can diced tomatos, drained, liquid reserved
8 oz. baby bella mushrooms, chopped
1/4 c. + 1/8 c. quinoa
3/4 c. carrots, grated
15 oz. can black beans, drained and rinsed
salt and pepper
2 bell peppers, halved
cheddar cheese
Preheat oven to 350 degrees.
Heat some olive oil in bottom of medium pot over medium heat. Add chopped onion and celery (I throw mine in frozen, because whenever I have leftover onion of celery, I chop them up and put in freezer bags to keep on hand. They defrost very quickly.) and cook for 5 minutes or so.
Add cumin, garlic, mushrooms, about half of the drained diced tomatoes (which I chopped up because I don't like big pieces of tomatoes) and saute for until liquid is evaporated.
Add quinoa, grated carrots and 1 cup of water, cover, bring to boil, reduce heat to medium low, and simmer for 15 minutes. I had to keep adding water, and stirring a little bit, to keep it simmering, and worried about this having never cooked quinoa before, but it was fine. (My bag of quinoa also said cooks in 10 minutes, but the recipe said 20, so I went with 15 minutes which was perfect.)
Remove from heat, add black beans (I used half a can, but I'd do a whole can next time), season with salt and pepper (and Cajun spices if, like me, you use them in everything).
Pour liquid from tomatoes in baking dish, add pepper halves (I used red and green and I'm not sure which was better... mmm), fill with quinoa mixture, cover with foil and bake 40 minutes. Uncover, top each pepper with sliced cheddar cheese, and bake 15 more minutes. 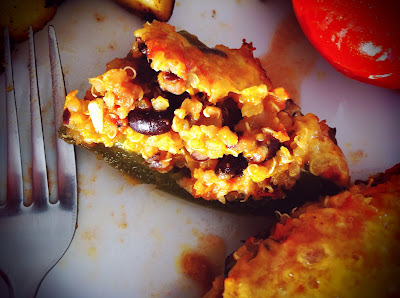 Labeled how to boil water, the kind diet