We'll be in Las Vegas until tomorrow, and the last few days have been so fun, but I'll keep the post until we are home. Instead, here's an outfit that shows some of the shopping I've been doing, mostly off my summer list: 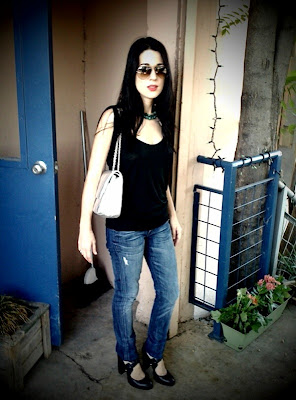 New shoes, jeans, aviators(!), and turquoise necklace(!). The necklace is so exactly like what I wanted it's unbelievable. We stumbled into a little silver shop in Houston that had so many! This one is a long strand that I double to make the choker. It's perfect, but a little heavy.

I wore this to go watch one of D.'s friends play with his band at a little bar. They were so good. It really made me want to keep practicing my guitar, I think maybe I can get a little better at it...

There are so many things that I want to to do one day, that have been one my list for a while:

Film. I miss it. And I still have loads of stuff to get developed. I'm thinking it may be easier just to drop them off somewhere instead of waiting to get back to a darkroom. Not sure I would even remember how to do it!

Sew something. This has been on my list since we were living in Gloucester and I bought a sewing machine. Especially now since touring our neighbors' apartment: he had told us he was a designer, and he has a little studio (even does metalworking for these intricate clasps) making the coolest leather pieces and other stuff. It was very impressive.

And another thing, that for some reason has been in my head to do for a while: horseback riding. Especially now after War and Peace. We live 45 minutes from the cowboy capital of America, so this shouldn't be a problem!

I just love this necklace, I usually am not an accessories type of girl, but this is one that kind of goes with everything and that I don't feel silly wearing: 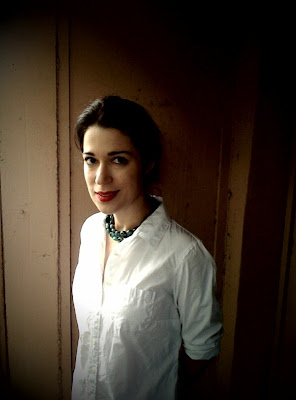 I also bought the Nars Dragon Girl lip pencil, and I've been wearing it so often that I feel weird without it. It's so easy to apply, no lip brush involved and very matte and long-wearing. I think this is it for red lips, definitely my favorite and now I have no desire to try anything else.
Posted by Corrin at Saturday, May 01, 2010

Labeled what not to wear